Your First and Last stop for conscious gifts 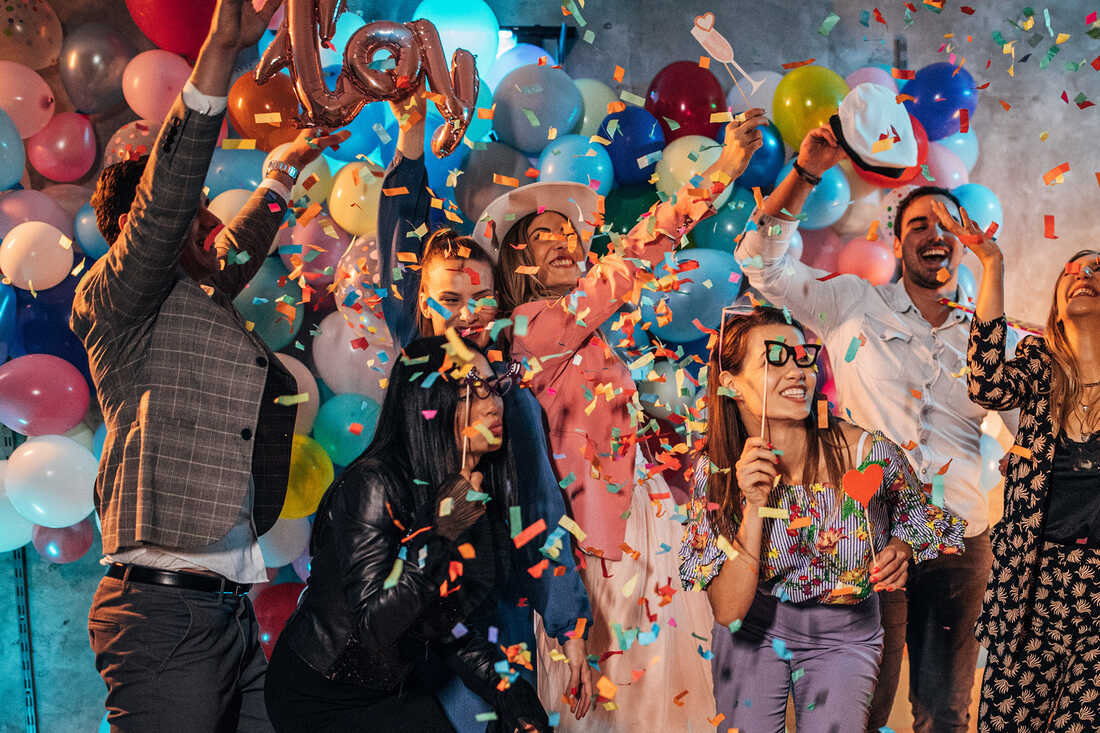 When Brandi Milloy was pregnant with her daughter in 2017, she didn't want an ordinary baby shower, where everyone politely sat around and watched her open presents. So she centered her party around something a bit unexpected: her pregnancy cravings.

The party menu featured Chick-fil-A nuggets, sweet tea, sour candies and a cereal bar. And her guests ate the theme right up. "People were like, 'This is like no other baby shower I've ever been to,' " says Milloy. "It became such a conversation starter."

That's the power of a good theme party, says Milloy, a food and lifestyle journalist and TV host whose party planning skills have been featured on the Today show and the Food Network. A classic birthday cake and balloons will always do just fine, but theme parties elevate a celebration, she says. They thoughtfully engage guests, reflect the personality of the host and bring in elements of surprise and creativity.

And you don't have to wait for Halloween or New Year's Eve to throw a great themed gathering, she says. "Life is too short to wait for the holidays. Every day can be a celebration."

So how do you host a theme party for the ages? Milloy and Natasha Miller, CEO of event planning company Entire Productions, have a goodie bag full of ideas, from how to pick a clever motif to how to make your idea come to life — no RSVP required!

Choose a party theme that guests will connect with

A strong theme is like that one friend who you invite over early to help you get the party started, says Milloy. They act as a second host by giving your guests something to talk about. A themed costume or potluck dish, for example, gives people a shared activity to bond over.

So how do you pick the right motif? Choose something that "your guests will be delighted by and understand," says Miller. Classic themes like a costume party for Halloween, The Great Gatsby for New Year's or a casino night for a 21st birthday party, for example, are familiar enough for people to get behind without too much explanation on your part.

If you want to think outside the box, don't be too overly narrow, says Miller. "If you pick a theme that more than 30% of your group doesn't know or can't relate to, it might crash and burn."

So consider your guest list. If you want to throw a party dedicated entirely to the fifth season of Game of Thrones, for example, you might want to just invite your friends who are superfans. Otherwise, you might find yourself disappointed by your guests' lack of enthusiasm — and your guests might feel excluded by your specificity.

Other than that, be as creative as you want to be, says Miller. Have fun with colors (this TikTok theme party trend seems like a blast, for example), movies, sports and pop culture moments. What about a Patrick Swayze movie marathon for your movie-loving brother named Patrick? Or a bachelorette party where everyone dresses up as a version of Beyoncé? The sky's the limit, she says.

Give people plenty of notice

Don't put yourself or your guests through the pain of last-minute shopping, says Milloy. "If you're expecting guests to have a costume or bring a white elephant gift, you should give them at least six weeks" of advance notice.

The extra time can also give people a chance to make room in their social calendars, says Milloy, especially if your event is during a busy holiday season when you might have competition. "I received a pumpkin carving invitation in July and that felt so far away, but it's in our family calendar. If you want people to be at your party instead of someone else's, always think on the earlier side."

Then, make your party theme obvious, says Miller. "Usually on any invitation, what to wear is in the tiniest print at the very bottom. It's something that a lot of people might miss."

So if you're asking people to bring something or wear specific attire, be vocal about it, Miller says. Clearly note any important information on your original invitation, then remind people again closer to the date.

Consider providing guests with inspiration for the theme as well, says Miller. "I love a good Pinterest board that [gives people different options for costumes]. That's the best for people who don't consider themselves creative and who may not really be able to interpret the dress code."

Once you've set a date and picked a theme you're excited about, say, an under-the-sea motif for a kid's birthday party, it can be tempting to buy up all the mermaid and fish-themed inventory at your local party supply store. But when it comes to making a theme come to life, both our experts agree that less is more.

Milloy waters a plant at a pollinator-themed party she hosted, which she says was all about bringing awareness to the importance of bees. At the event, guests could plant bee-attracting flowers such as poppies that doubled as party favors.

Miller suggests aiming for "about 5 touch points'' to make your theme feel full and real without being over the top. And you have a lot of options of where to do that: invitations, food, music, centerpieces, backdrops, games, costume contests or favors.

Don't forget to think about your budget. If you're planning a one-off event, you probably aren't going to use your decorations again. So consider thrifting or hunting through no-waste groups online to find what you need, says Milloy.

"One of my favorite things is my mom swap" group on Facebook, she says. It's a place where moms reach out to other moms to see if they have any items they want to give away or exchange, including themed items for parties. Milloy says she's seen moms ask for cake stands and those peacock chairs so often seen at baby and bridal showers these days.

If you can't find what you need for your party – say, the perfect floral garland for your Día de los Muertos gathering – try making it instead. Pinterest, Etsy and YouTube are your friends, says Miller, and there are a number of fun and easy DIY tutorials out there for making paper flowers and other Day of the Dead-themed party props to help you add flair without breaking the bank.

Make it easy for people to participate, but don't force it

Inevitably, says Miller, someone is going to show up out-of-theme – and that can be frustrating after you put so much time and effort into planning a thoughtful event. But don't give your guests a hard time about it, she says.

Instead, she says, be creative about making everyone feel welcome and included. If you're throwing a 70s-themed costume party for example, have spare accessories like round sunglasses or peace sign necklaces ready for guests in a basket by the door. Or find other ways to pull people into the festivities. Maybe they're too shy to wear a costume but they'd love to pitch in as game master or bartender or playlist DJ.

Lastly, Milloy says it's important to remember the reason for your gathering in the first place. "I'd rather them show up and not dress up then not show up at all," she says. "If a friend comes over and they're not feeling it, I am never going to force the theme on them. But I'll pass them a cute little cocktail with, like, a little floating eyeball in there, and try to make them giggle."

Credit: And Tagle and Sylvie Douglis from NPR

HERE'S MORE ABOUT THE PRODUCTS IN YOUR BOX:

We have something for YOU!

Join our community for $5 off your order!